While reveling in being a part of the star-studded world football governing group, the Nigerian talks about how she intends to make her voice count

Asisat Oshoala’s ambition in the Fifa technical advisory group is to ensure that African football gets to the ‘next level’.

The Nigeria and Barcelona star headlines the list of heavyweights set up by the football ruling body concerning the growth of the women’s game globally.

Their discussions will include topics around competitive balance, increased opportunities for underserved nations, a Fifa Women’s Club World Cup, the Fifa international windows and the possibility of a biennial Fifa Women’s World Cup, which has generated contrasting arguments recently.

In a no holds barred chat with Goal, the four-time African Women’s Player of the Year gushes about her inclusion in the group that will be led by former two-time World Cup-winning coach Jill Ellis.

More importantly, she reveals what her roles would be and what she intends to achieve, having found a ‘bigger platform’ where her voice will be heard.

“As a young player growing up, I went through a lot of things because of my environment regarding women’s football,” the 27-year-old told Goal.

“I have always been a person who likes to make things right which was why I set up my foundation as well without being noticed.

“At the end of the day, it is to bring forward the errors and what is making us stay back with the ambition of making things better. The goal is to make African football get to the next level.” 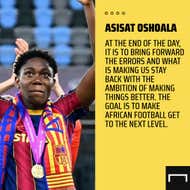 “When you stay in some certain communities, sometimes you need the bigger platform to raise your opinion, to lay your complaints so that people can actually come in and help you,” she continued.

“I have a good relationship with Caf committees and all that, but I feel this Fifa [committee] is a bigger one.

“I didn’t ask for this neither did I apply, so for them to contact me to ask me to be a part of this, they would have seen a thing or two about me and what I have been doing so far.”

Most probably the greatest African women’s footballer of all time owing to her trophy-laden career, Oshoala who represented Liverpool and Arsenal, has been an exponent on empowering girls football in Africa.