HOT GIST! How Davido Reportedly Ridiculed & Humiliated Nengi at Their Hotel in Dubai

A few hours ago, a new report making the rounds online alleged that former Big Brother Naija Housemate Nengi Rebecca Hampson is with Nigerian singer Davido in Dubai for his birthday.
The report, which is making the rounds on social media and first shared by Instagram blogger Xoxocorner, alleged that Davido disrespected Nengi on Thursday after having fun at the club.

According to the report, Davido, while leaving the club, picked about five girls and took them to the hotel room he’s sharing with Nengi and looked her outside.

The source also revealed that all effort to get another room for Nengi was in vain, and she was later taken to another hotel by some members of Davido’s crew.

The report added that the issue generated a fight, and the management set Davido and his crew out of the hotel, and Davido was never remorseful about the incident.

The post reads: Hello… I have gist for you, Nengi is in Dubai with Davido but that’s not even the problem, the main issh is that Nengi has lost her respect, everybody knows she’s with Davido but if you see how Davido disrespected her on Thursday, they all went to club, after club, Davido picked about 5 white girls, brought them back to their hotel where him and Nengi are staying together and locked Nengi out, all effort to get her another room was in vain until one of his boys now took her to another hotel.
When she came back in the morning, Davido didn’t even feel any remorse and the next day, due to the fight the owner mgt asked all of them to leave, she still followed Davido to his room instead of asking for her own room, even all Davido boys disrespected her as well. 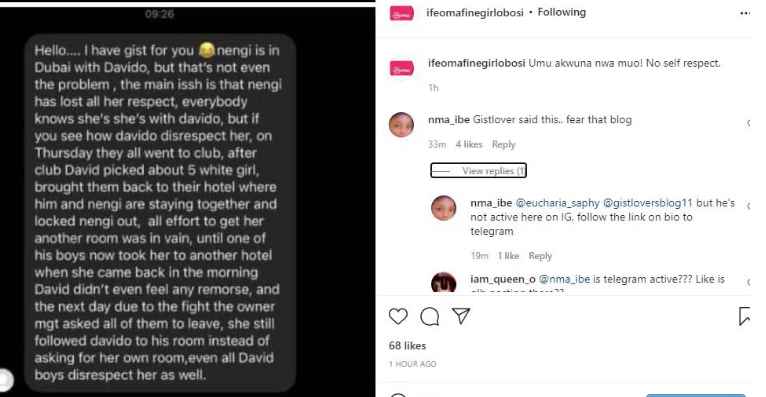 This report making the rounds online generated mixed reactions online as some netizens claimed that the news on Nengi dating Davido is not new.

ikeegod wrote: Nengi has always been davido smally right from Adam… We the gods know.. it was nengi that made chioma Waka…… Cos our felt disrespect that aquired china bumbum will used to displace her… Our too come go turkey come back with aquired Azuka nwanne nneka…. The story long….

naijaebay_ wrote: Na wa o. And I thought she had class

vanessa_kanma wrote: The person who doesn’t have shame and respect here is davido