IMOPOLY notice on relocation of faculties

Sequel to Imo State Government’s directive that the Polytechnic at Umugwo should be relocated to Omuma, Orlu, Mbano and Ikeduru campuses and the Polytechnic Academic Board decisions taken in its last Emergency Meeting held on Wednesday, 3 November, 2021

The Polytechnic Management in line with the above directive and decision directs that all the Schools/Departments should be moved to their respective campuses, not later than Thursday 11 November 2021. 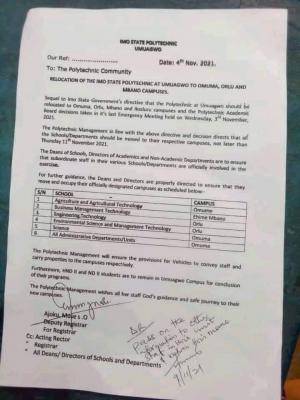 The Deans of Schools, Directors of Academics and Non-Academic Departments are to ensure that subordinate staff in their various Schools/Departments are officially involved in the Exercise.

For further guidance, the Deans and Directors are properly directed to ensure that they move and occupy their officially designated campuses as scheduled below

The Polytechnic Management will ensure the provisions for Vehicles to convey staff and carry properties to the campuses respectively.

Furthermore, HNDII and ND Il students are to remain in Umuagwo Campus for conclusion of their programs.