Xavi: Barcelona legend will bring back the glory days – Okunowo The Nigerian icon thinks his former teammate will take Blaugrana back to the top, claiming he knows the club so well

Gbenga Okunowo claims Xavi will do everything possible to return Barcelona to their “glory days” following his announcement as the Catalans’ new manager.

The Spaniard will now take charge of the Blaugrana following the sacking of Ronald Koeman whose 14-month reign at Camp Nou came to an end following Barca’s 1-0 defeat against Rayo Vallecano.

With his appointment, Barcelona players would look up to the club’s icon for inspiration as they hope to revive their stuttering 2021-22 campaign.

And Okunowo, who played alongside the 41-year-old at Camp Nou, claims the legend can help turn Barca’s fortunes around.

“Xavi’s appointment is a good one. I’ve known him for so long. He knows the club in and out,” the former Nigeria international told Goal.

“He’s always been rated just as Pep [Guardiola] was rated at Barca. He has always been a replacement for Pep all along.

“Barcelona always think ahead with their backup plan. I’m quite confident they will not regret recruiting him as their coach. Barca just need to give him all the support.” 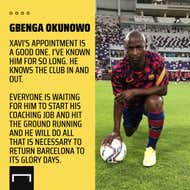 Xavi is one of the most decorated players in Barca’s history, having won 25 trophies between 1997 and 2015 including eight Liga titles and the Champions League.

He made 767 appearances for the club, a record bettered only by Lionel Messi, and also contributed 85 goals and 185 assists.

Okunowo states his off-field personality and experience would help him achieve success in his new role.

“He’s Barca through and through, so he knows that he needs to use his experience and all the skillset he has gained over the years to make his coaching tenure a successful one,” he continued.

“He knows what needs to be done to make Barcelona reach their top-notch level of performance. I know him as a calm person.

“He will set up his management and backroom staff in such a way that all hands will be on deck to deliver good football results for Barca.

“Everyone is waiting for him to start his coaching job and hit the ground running and he will do all that is necessary to return Barcelona to its glory days.”