Operatives of the Nigerian police force, Plateau State Command have reportedly arrested a suspect believed to be the boyfriend of Jenifer Anthony, a 300-level student of the University of Jos who was found dead in apparent ritual killings in a hotel.

According to Human rights activist, Israel Joe, who shared the development, the suspect was arrested today, January 12, 2022. 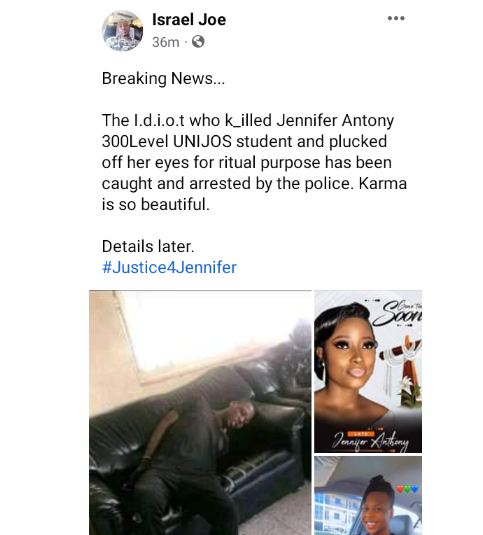 Recall that the deceased, who was a student of the Department of Special Education and Rehabilitation Science of the University, was found dead in a hotel with her eyes gouged out and other vital organs missing after being lured to Domus Pacis lodge along Zaria road Jos, by the suspect said to be her boyfriend.

It is also alleged that the parents of the suspect who is now feigning insanity, had shaved off his hair and admitted him to a psychiatric hospital where he was traced to and arrested.