Ex-BBNaija housemate, Boma Akpore took to social media to throw a jibe at his fellow colleague, Angel while listing his future goals.
The actor has been taking swipes at Angel and her fans on social media, bragging about being more successful than her.

Revealing his dreams in an Instagram story on Wednesday, the reality star implied that, unlike his colleagues whose dreams are owning cars, houses, , wigs and bags, he hopes to win an Oscar, Emmy Golden Globe and SAG awards.

He wrote: “Them: House, car, wigs, shoes and bag. Me: Oscar’s, SAG award, Emmy’s, Golden Globe, Hollywood or nothing.” 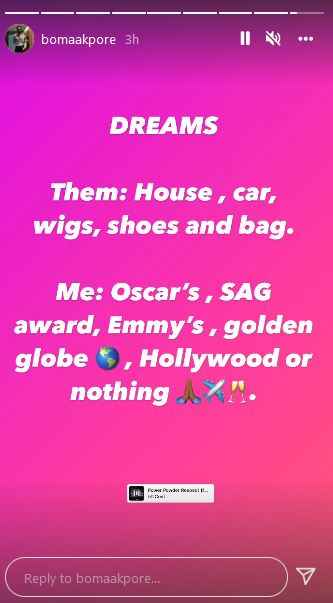 During the Big Brother Naija show, Angel and Boma got into a heated argument over a kiss. Boma called the former a child and added that participating in the reality show was her biggest achievement.