FUDMA reacts to claims of banning Sunday service on campus

The Federal University of Dutsinma, Kastina state has refuted reports making rounds that students have been barred from holding church services on Sundays, on campus.

This comes after a circular signed by the institution’s Director of Security Services, CSP Abdul T. Salisu, stated that Tuesdays and Thursdays (6:pm to 8:pm) were the only approved days for holding church services on campus, while Sundays are considered a general day. 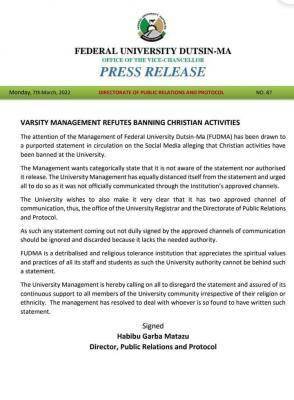 The memo was addressed to the various churches operating on campus including, Christ Embassy, Roman Catholic church, among others.

In a press release issued on Monday, March 7, the university debunked the ban saying it wasn’t aware of it, nor did it approve the statement.